Dan got a new MacBook Pro today. Aaron got an iPhone. Started me thinking about the computers I’ve used or owned over the years.

Commodore Pet – at Heinz Semder’s import office in Brooklyn. I only really sat in front of it.

Borroughs 68000 – I took a Pascal programming course at Franklin & Marshall when I was in seventh grade. We used terminals (Honeywell or Teledyne?), but I have no idea what the OS was. Once they toured us through the Burroughs 68000 mainframe room. What a cool memory. A roomful of well organized blue refrigerator shapes. Whisking tape machines…and those massive, multiple-platter hard disk machines that were about the size of a dishwasher. Capacity? I don’t know. Each student had a chance to make a punched card—probably with our name.

Mattel Intellivision – Shared it with my step-dad for years.

Commodore 64 – My first computer. Awesome sound chip, SID. Programmed in BASIC, Logo, Pascal, broke things in 6510 assembly language. Massive external 5-1/4 floppy drive. Used GEOS for a short time before it finally fried…something in the power supply must have shorted, because when I opened it up, paths on the circuit board were warped and wavy. Melted!

Atari 1200XL – My friend Rick got this for Christmas. Best thing I did on it was write a program to make random geometric shapes. We thought they results would make great OP t-shirts.

Apple Macintosh SE – Borrowed from Casey Dixon, who would later become my wife.Apple Quadra 605 – The first computer I bought on my own.

iMac – This was Casey’s.

Apple Powerbook G4 – One of many laptops I used at Ritter. Other machines I used there include Quadra 950 with Daystar accelerator, PowerMac 7200, PowerMac 9500, G3, G4.

Apple iBook xxxx – I’m not sure which one Casey has right now. 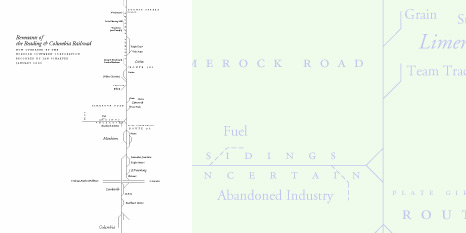 I often wonder about the possibility of combining my varied interests to create something more meaningful, more lasting, than any one avocation ever has the chance to produce. Last night while looking at my partial schematic of the former Reading & Columbia Railroad that runs through Lititz I thought the text labels on the diagram might be more understandable if I rotated them 90 degrees. This felt like the first time I thought about the railroad as a designer, not simply a rail fan. Within a short time I transformed my barely serviceable sketch into an a more lucid and artful interpretation of the subject at hand. I don’t expect that a “map” like this could matter much to anyone else, but I feel compelled to pursue the idea a bit further, and to eventually take it into the letterpress shop.

I just discovered this most interesting industrial compound. These buildings comprise Landisville Railroad, Inc. (LRI), a recently defunct railroad car building and repair shop just west of Landisville, Pennsylvania. LRI is represents the end of a short spur of track that branches off the Amtrak mainline at Salunga/Landisville.

I have always liked metal quonset huts for their rugged, no-nonsense construction and sheer visual appeal. The unpaved lot on which these are situated just intensifies the feeling. Notice the traditional 6-pane windows placed as different angles—chords of the circular surface they breach. Also interesting is the scalloped metal awning over the nearest window and over the window of the building in the center background. Sweet. There are several quonsets on this compound, which I am afraid will soon be lost to progress. If I could paint…

I will try to post more shots of this location when time permits. 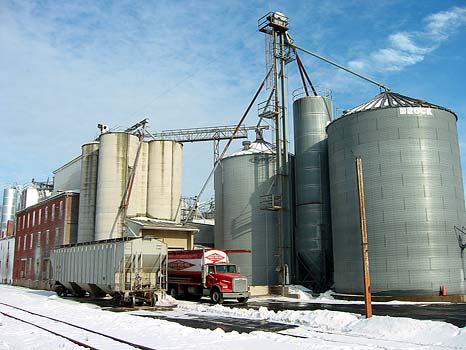 If trains are big, then feed mills are huge. I love the scale of this mill in Denver, PA, photographed January 2005. This is probably quite small by Midwest standards. Notice the spiffy new-ish Archer Daniels Midland covered hopper (ADMX 7240) on the rail siding: a bit clean for my taste, but some rust-staining is evident. 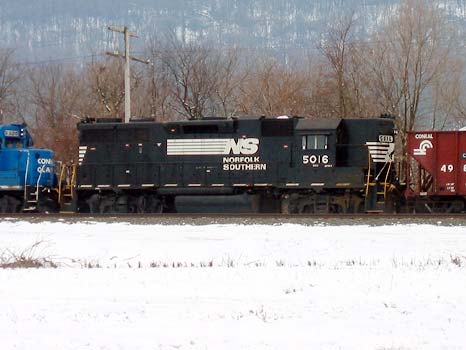 Welcome to the next manifestation of my continued interest in things industrial, uh, that is, my lastest obsession. Trains. The grimier the better. This photo shows a GE EMD SD38-2 at the head of a coal train just outside of Newmanstown, PA. The photo was taken in 2005 but this engine was built in the early seventies. Isn’t it beautiful?!