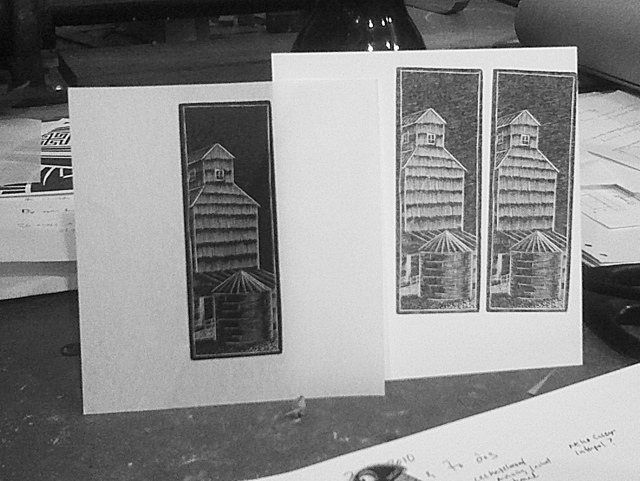 This is the first progress proof of a small engraving I’ve been cutting this week. There’s still much work to be done, but the composition and tone are beginning to emerge. At the moment, the grain elevator in the background appears to be thatched. That will need to be refined.

The scene is not real. It was drawn from a model that I composed with N-scale (1:160) structures – ones normally used for a model railroad.

Some of you who attended the ATF conference in Terra Alta, WV a few years ago may remember my presentation on the ‘Monotype’ Disaster. In short, the first caster I acquired was damaged during shipping. I’ve had it in storage ever since, with the intention of using it as a parts machine. In the mean time I obtained three additional casters – two fully functioning and another for parts. The costs of storing these large machines has finally forced my hand and I will be disassembling it and offering caster parts from the original machine. In fact, the damage to the first caster – though mortal – was restricted to a a very specific area. Most of the late-model british composition caster are in pristine condition.

If you are in need of Monotype Composition Caster parts, please contact me. I am particularly interested in trading parts for composition and display matrices, as well as wedges, stopbars, keybars and other tools of the typecasting trade.

Keeping with the do-it-yourself approach my band has taken to producing our demo, we’ve opted to print letterpress sleeves for the promo cd. Production is underway here at my print shop in Lititz. END_OF_DOCUMENT_TOKEN_TO_BE_REPLACED

It took a bit longer to complete than we expected, but my band, Smiles, Everyone, finally has a new eight-song demo. You can listen to it here. We are actively seeking gigs in Philadelphia and Lancaster, PA (and points in between) for the summer and fall of 2009.

If, like us, you crave new, original music, please listen and tell us what you think.

I just bought this sailboat, an 11′ Super Snark. I’ve wanted to learn to sail for a few years—this seemed like the perfect sailboat with which to start. It is purportedly unsinkable and very stable. The ABS clad EPS foam hull certainly seems very durable and indeed, could not possibly sink even if completely swamped.

END_OF_DOCUMENT_TOKEN_TO_BE_REPLACED

This is the first live test of the setup described in the previous post.

Every now and then—well, every spring—I get the urge to go hiking, which to me means looking for interesting, beautiful, or uncommon flora and fauna. Over the years my interests have varied among ferns, fish, insects, birds, fungi, and trees. This year it’s back to the ferns and fern allies. I recently had the idea to start recording more data about my ‘discoveries’, and with the iPhone, GPS, camera, this blog, and geotagging, I could have a bit of geek fun recording it.
END_OF_DOCUMENT_TOKEN_TO_BE_REPLACED

Here is my current bass rig for Smiles, Everyone, which includes:

I don’t use half of these pedals 90% of the time. Only the compressor and mute are essential. M-300 is for occasional phaser and tremolo. Big Muff is for fun.

A friend recently asked for my input on building a pond at his mod little house in Lancaster. Now in the second winter on our pond, I have some time to philosophize about the process of designing and building a pond.

Dan got a new MacBook Pro today. Aaron got an iPhone. Started me thinking about the computers I’ve used or owned over the years.

Commodore Pet – at Heinz Semder’s import office in Brooklyn. I only really sat in front of it.

Borroughs 68000 – I took a Pascal programming course at Franklin & Marshall when I was in seventh grade. We used terminals (Honeywell or Teledyne?), but I have no idea what the OS was. Once they toured us through the Burroughs 68000 mainframe room. What a cool memory. A roomful of well organized blue refrigerator shapes. Whisking tape machines…and those massive, multiple-platter hard disk machines that were about the size of a dishwasher. Capacity? I don’t know. Each student had a chance to make a punched card—probably with our name.

Mattel Intellivision – Shared it with my step-dad for years.

Commodore 64 – My first computer. Awesome sound chip, SID. Programmed in BASIC, Logo, Pascal, broke things in 6510 assembly language. Massive external 5-1/4 floppy drive. Used GEOS for a short time before it finally fried…something in the power supply must have shorted, because when I opened it up, paths on the circuit board were warped and wavy. Melted!

Atari 1200XL – My friend Rick got this for Christmas. Best thing I did on it was write a program to make random geometric shapes. We thought they results would make great OP t-shirts.

Apple Macintosh SE – Borrowed from Casey Dixon, who would later become my wife.Apple Quadra 605 – The first computer I bought on my own.

iMac – This was Casey’s.

Apple Powerbook G4 – One of many laptops I used at Ritter. Other machines I used there include Quadra 950 with Daystar accelerator, PowerMac 7200, PowerMac 9500, G3, G4.

Apple iBook xxxx – I’m not sure which one Casey has right now.